His Royal Highness The Duke of Kent and over 1,500 Freemasons and their families from across Surrey, Kent and Sussex descended on Canterbury Cathedral today (Saturday 18th February 2017) for a special Service of Thanksgiving to celebrate 300 years of English Freemasonry. The service was held to mark the Tercentenary of the founding of the Freemasons’ governing body, The United Grand Lodge of England.

The Duke of Kent – who celebrates 50 years as Grand Master of the fraternity and Patron of the Canterbury Cathedral Trust – was the guest of Very Revd Dr Robert Willis, Dean of the Cathedral, who took the service. Surrey Freemasons have supported Canterbury Cathedral for many years, helping to fund essential repairs to the building, and the training of a number of apprentice stonemasons. To mark Tercentenary celebration, a major donation of £300,000 has been made by the Freemasons throughout the South East to support the restoration of the Cathedral’s North West Transept Tower.

R. W. Bro Ian Chandler, Provincial Grand Master of of Surrey Freemasons, said: “It was a delight to join with so many of our Surrey Brethren attending the service in Canterbury Cathedral marking three hundred years since the founding of the first ever Grand Lodge. Surrey Masons raised over £50,000, together with similar donations from East and West Kent and Sussex Masonic Provinces, to help finance the restoration of the North-West transept of the Cathedral. This was a magnificent effort.  My sincere thanks to all those Brethren who raised funds and contributed – over and above our other charity work which continues to thrive.” 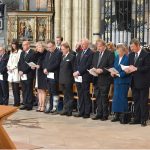